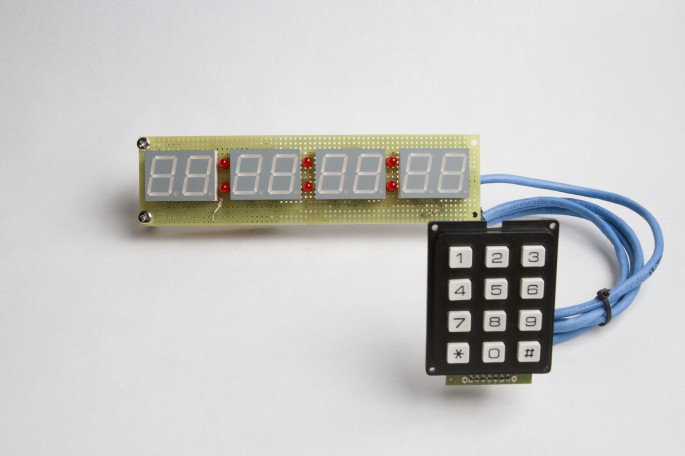 A friend of mine was asked to make a prop that looked like a home made bomb for a movie that was being produced. I helped out by designing and building the countdown timer display circuit. As you can see it has a bit of a home made look to it, which is what the director was looking for to fit within the context of the story. 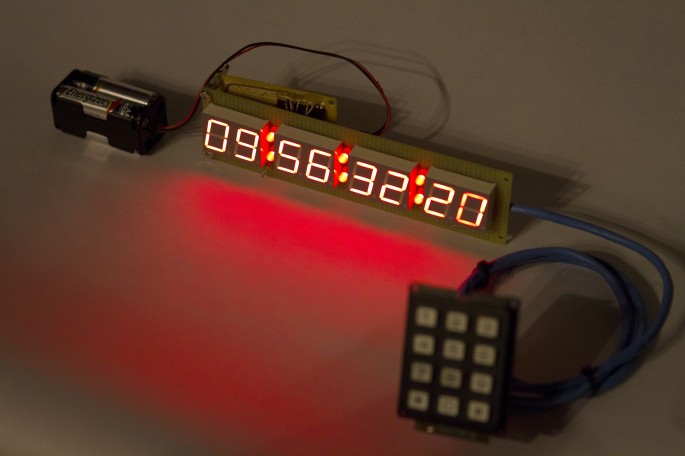 This project used parts I got from Digikey and Sparkfun. It’s built on two separate pieces of perfboard and uses only two ICs to operate the display, a LED Display Driver (MAX7219) and an Atmel ATTiny4313. Click continue reading for more photos, descriptions, and a video of the finished timer! 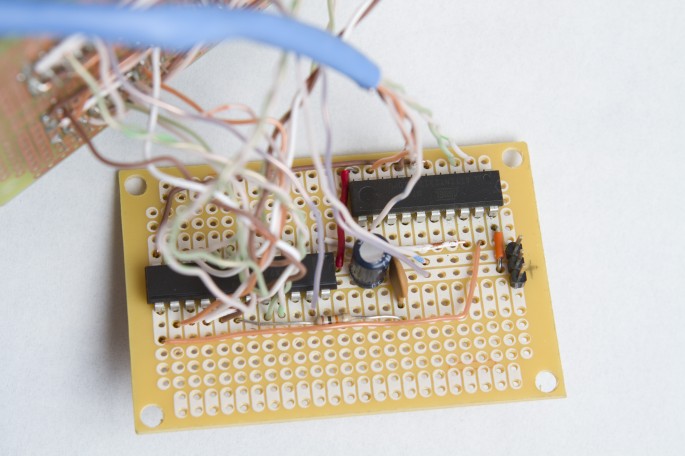 Above is the control board. There was a specific size constraint on this project so I had to do two separate boards, which made it hard to get all the wiring right. Here you can see the Atmel micro-controller and the 7-segment display driver. The uC tells the display driver what numbers to show on the 7-segment display, and the display driver handles all the hard work of cycling through the digits and figuring out which segments to turn on. I’m particularly proud of the recursive function I came up with to decrement the amount of time on the display:

The above segment works efficiently because it only recurses for the digits that need to be changed. Therefore, most of the time it doesn’t even need to recurse. 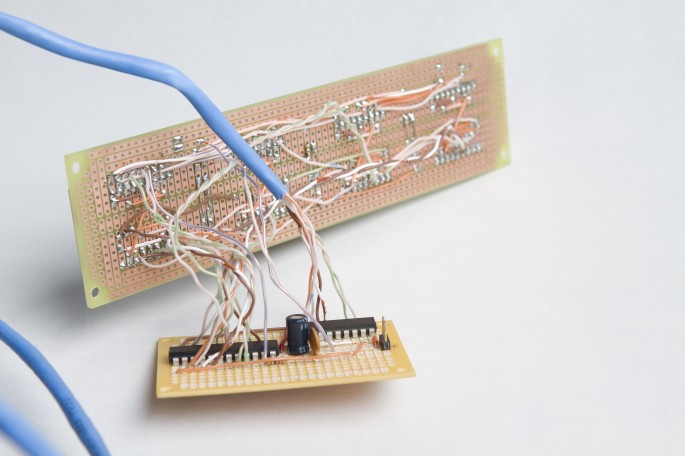 The back side of the LED display took forever to solder together. It’s hard to tell in this image so click here to see it fullsize. All of the segments of the LEDs had to be linked together and then connected to a pin on the MAX7219 along with all of the common pins (one for each digit). It was tedious and I don’t want to ever do it again! 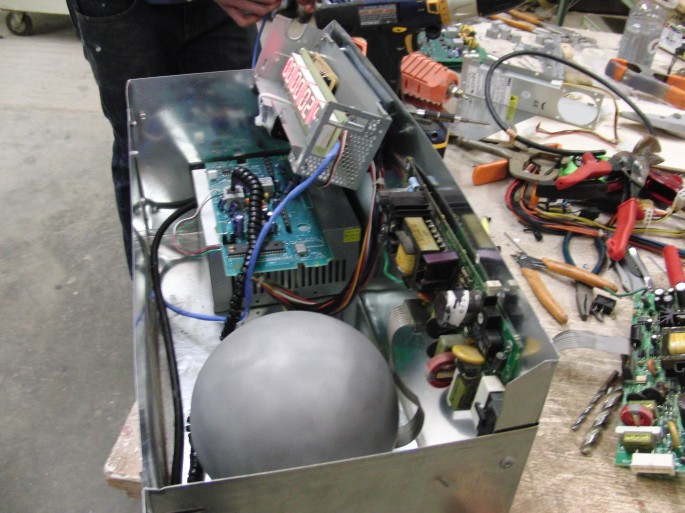 After the timer was finished we started putting together a bunch of fancy looking crap to make the ‘bomb-bag’. It’s just a bunch of old phone circuit boards along with some power supply stuff. 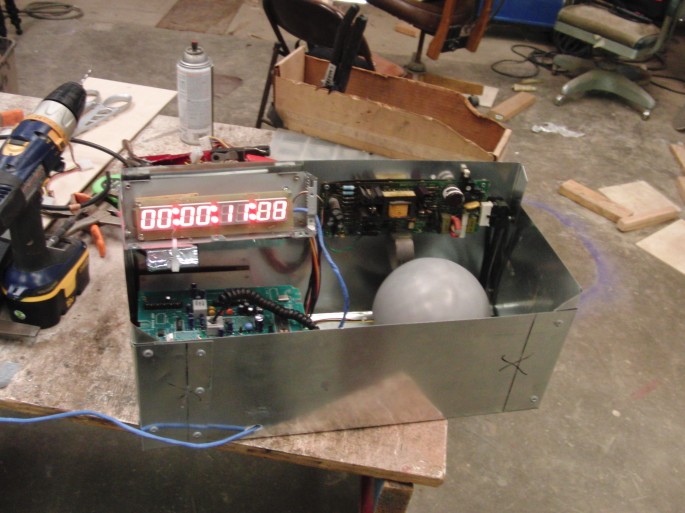 It’s gonna blow! Where’s Jack Bauer when you need him. 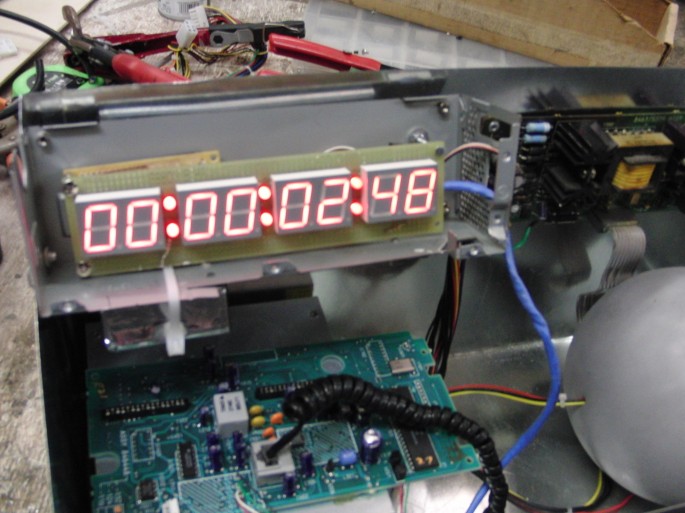 You can see the radioactive orb has some wires going into it. It’s just a welded steel ball but it looks pretty good as a warhead. 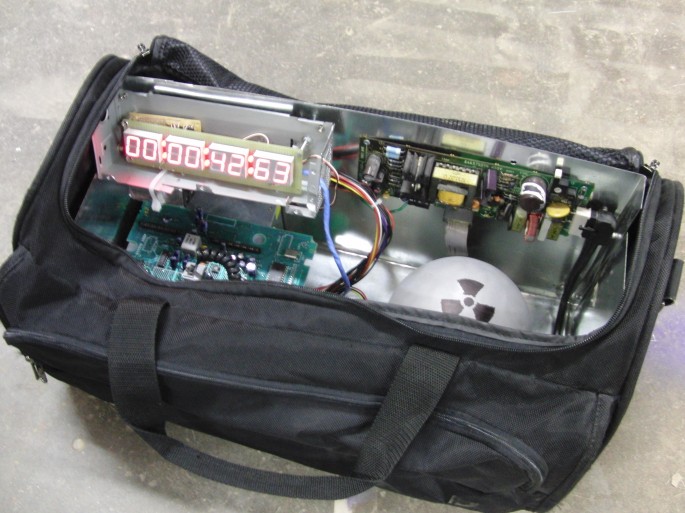 Add a duffel bag for good measure and you’ve got yourself one theatrically believable homemade bomb.

Check out this video of the timer in action! It looks great while it’s counting. You’ll notice that I programmed the # key as a start/pause button and the * key resets the timer to programming mode. Also as an added touch the timer flashes 00:00:00:00 when the countdown expires.

Got anything to say about this? Leave me a comment! Anybody want to see some source code?